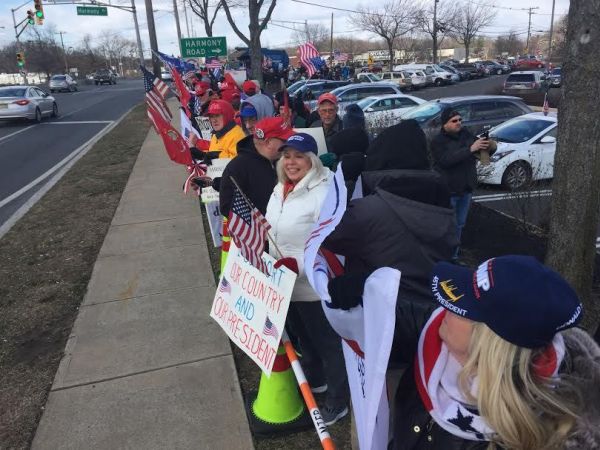 “What’s that rally for?” asked a woman, pulling out of the parking lot. “Oh, it’s pro Trump? Awesome! Sign me up!”

Indeed, many cars on Rt. 35 and Harmony Road honked non-stop as they drove past.

Four counterprotesters stood across Harmony Road. One held a sign that read “I’m not Putin up with this.” There was a very brief scuffle between a few Trump supporters and a single counterprotester, as they got into a heated, shouting argument. But Middletown police quickly intervened and led the counterprotester off the sidewalk. Nobody was allowed to stand on the sidewalk during the rally; protesters were confined to the grass.

Immigration, support for the wall, curbing welfare abuse and increasing jobs were all passionate topics among attendees. Some in the crowd were born elsewhere and said they supported Trump’s tough stance on illegal immigration.

About 150 bundled up, braved the cold to show their support for @realDonaldTrump in Middletown as part of nationwide demonstrations pic.twitter.com/x4DnzqNP61

Kenny said she loves “everything” Trump says. “I love Trump!” she screamed with joy.

Trump won Middletown Township, NJ in the 2016 presidential election by a clear margin, receiving 21,267 votes compared to 12,979 for Hillary Clinton, according to voting records from the Monmouth County clerk’s office. About 73 percent of the 49,510 registered voters in Middletown Township voted in total.

Carla Spratt, who drove to the rally from Little Falls, is from Peru originally. “I am an American citizen and I came legally. My father brought me here and he was a legal citizen. I have sympathy for people, but they have to apply to come the legal way. That’s just the bottom line.”

Her husband, Matt Spratt, wearing a red “Make America Great Again” trucker hat, said he supports a path to citizenship for some immigrants who are here illegally — provided they have never been arrested. 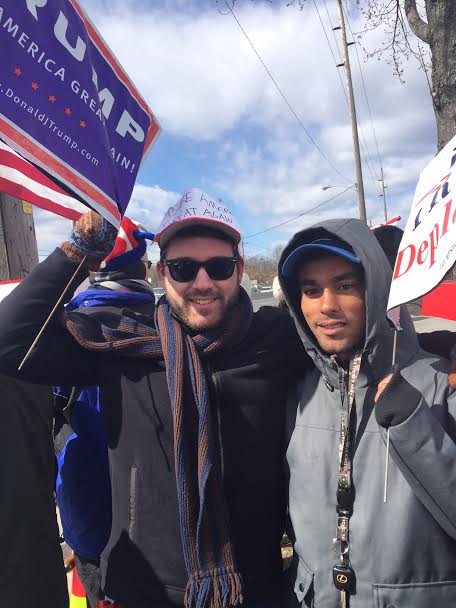 “If people come here and they never broke the law, and work hard and stuff like that, they should have a path to citizenship. Even if they came illegally,” he said. “If you’re here, you’re working, you’re trying to better yourself, you’re not breaking the laws of this country, I don’t have a problem with that. As long as you’re contributing to society.”

But he also said he’s seen co-workers in the construction industry suffer due to an influx of cheap immigrant labor.

“I know a lot of people, especially in the construction field, illegal immigrants get hired for $8, $10 an hour, and then you have guys here, American citizens, that are losing jobs left and right to people like that,” he said.