UK: Up to 6 People Can Exercise “Together” But 2 Meters Apart, Physical Contact is Not Allowed

The Anti-Defamation League (ADL) added the “OK” hand signal, the “bowlcut,” and anti-Antifa logos to its list of “modern calling cards of hate.”
Yep, you read that correctly, Jim Carrey’s bowl haircut in Dumb and Dumber is now … problematic, as are the early Beatles, Moe from the Three Stooges, and Mary Stuart Masterson in everything.

And then there are the problematic anti-Antifa symbols. The ADL explains those this way:

Some anti-antifa symbology simply re-imagines earlier anti-SHARP imagery, such as overlaying a red circle and diagonal bar on top of a common antifa symbols such as side-by-side red or red and black flags (derived from the logo of the 1930s German anti-fascist group Antifaschistische Aktion) or three downward-facing arrows (originating with German and Austrian Social Democrats opposing Nazism in the 1930s).

Maybe that would make more sense if I had more sleep, but the whole “diagonal bar on top of a common antifa symbols such as side-by-side red or red and black flags” kinda lost me.

This is obviously nuts. Antifa is a left-wing terrorist group dedicated to political violence, and only a simpleton or a propagandist would buy into or spread the idea this organized mob is what it claims to be (“antifa” is supposed to be short for “anti-fascist”).

What would happen if someone co-opted the ADL logo? Will the ADL stop using what is now a “hate symbol”?

Obviously, there are legitimate symbols of hate out there, but when you add “bowlcuts” and the “OK” sign, it all becomes a joke, a punch line; and the ADL is not only being ridiculous, the ADL is becoming dangerous.

Watering down legitimate hate with nonsense, lumping a burning cross and a swastika with a “bowlcut,” only diminishes the seriousness with which people will take any of this.

There is also the Orwellian factor.

In their relentless and totalitarian effort to “purify” and control our culture, the far-left continues to shrink the dictionary and eliminate the ways in which we communicate, which is itself an overt and deliberate act of fascism, a means to control our speech.

I get why burning a cross is a “hate symbol.” But now I have to worry about the “OK” sign, just because some Tolerance Taliban says so? 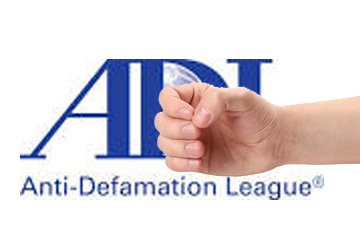