Behind The Media’s “Right-Wing Violence” Lie

Famous American conservative columnist Ann Coulter has finally pointed out that what she called the media’s “never-ending hunt for right-wing violence” is the exclusive product of a handful of journalists, and goes on to name them — but stops short of pointing out that they are all Jews.

In a new column published on the Townhall news site, titled “Why the Media are in a Never-ending Hunt for Right-wing Violence,” Coulter says that the reason “normal people are suspicious of the media’s narrative on Charlottesville is that we’ve heard this exact same story many, many times before.”

She points out that every year “since forever,” hooligans have “been rampaging through the streets, beating people up, setting off bombs, killing cops, smashing store windows, assassinating politicians and burning down neighborhoods—against capitalism, Vietnam, Nixon, Wall Street, a police shooting, Trump, Starbucks, a sunny day.”

At the same time, she says, conservatives “have generally avoided even the mildest forms of political protest, and, when they finally are driven to petition the government over their grievances, they pick up after themselves—at tea parties, town halls, Trump rallies and so on.”
The end result is that the “entire media are constantly on Red Alert for the threat of Right-Wing Violence.”

No matter the year or the circumstances, the media and their eunuch politicians are quick to blame any surprising violence on the Right-Wing Nazis of their imaginations—from Lee Harvey Oswald (communist) to Jared Lee Loughner and James Holmes (psychopaths) to the two stabbing murders on a Portland train earlier this year committed by a Bernie Sanders supporter, whom the media—to this day—insist, all evidence to the contrary, was a Trump supporter.

When, a few months after the first murders by a Sanders supporter, a second Sanders supporter opened fire on a congressional Republican baseball practice, putting GOP Rep. Steve Scalise in critical condition, that political attack was simply discarded. The media put the story of left-wing assailant James Hodgkinson in a lead casket and dropped it to the bottom of the sea.

There are the scores of other examples of imaginary right-wing violence invented by the media— then quietly abandoned when the facts come out. After weeks of hair-on-fire headlines, suddenly you just stop reading about the Duke lacrosse “rapists,” homicidal maniac Officer Darren Wilson or legions of Trump-supporters ripping off Muslim women’s hijabs.

Coulter then went into detail on some important examples:

During the 2008 campaign, the media were in a perpetual state of fright that racist Republicans would assassinate Barack Obama.

Naturally, when a local reporter claimed he’d heard someone in a crowd at a Sarah Palin rally yell, “Kill him!” about Obama, the media didn’t wait for more facts! The Washington Post’s Dana Milbank promptly reported the reed-thin allegation, which was then repeated in hundreds of other news outlets.

On CNN, David Gergen said that Palin was “whipping up these crowds,” creating “ugly scenes” with audience members yelling, “Kill him. Kill him” — and also claimed (without evidence) that they were yelling “racial epithets.” A CNN article on the alleged shout-out appeared under the headline: “Rage rising on the McCain campaign trail.”

MSNBC’S Rachel Maddow railed against the “mere mention of killing someone at a political rally,” saying, “it’s horrific.”
MSNBC’s Keith Olbermann took the gold, yammering on and on about the claim in nightly updates, culminating in one of his prissiest ever “Special Comments,” in which he demanded that John McCain suspend his campaign until “it ceases to be a clear and present danger to the peace of this nation.”

Needless to say, the Secret Service undertook a complete review. Agents listened to tapes of the event, interviewed attendees and interrogated the boatloads of law enforcement officers spread throughout the crowd.

Conclusion: It never happened. As even the nutty left-wing site Salon noted, “If (the Secret Service) says it doesn’t think anyone shouted, ‘kill him,’ it’s a good bet that it didn’t happen.”

No apologies, no retractions, no memory.

Another example Coulter discusses is when “polite, hardworking Americans came together to oppose Obamacare at tea party rallies in 2009 and 2010.”

As usual, once the dust had settled, the only violence at the tea parties and town halls had been committed by liberals.

On Aug. 6, 2009, for example, a black tea partier was beaten up by union thugs shouting the N-word at him at a St. Louis town hall. Six members of the Service Employees International Union were arrested. About a month later, on Sept. 3, 2009, 65-year-old tea partier Bill Rice had his finger bitten off at a health care rally in Thousand Oaks, California, by a lefty Obamacare supporter.

To this day, The New York Times has never mentioned either incident, so it can happily return to railing against the non-existent right-wing rage surging in the red states.

Yet another example quoted by Coulter was when the naked body of Census worker Bill Sparkman was found hanging from a tree in southwestern Kentucky, with the word “fed” written across his chest, back in 2009.

Liberals wasted no time in concluding that right-wing extremists had murdered Sparkman in a burst of anti-government hate.

A Census worker? Who hates Census workers? Unlike an IRS agent, an EPA inspector or even an agriculture inspector, a Census worker can’t arrest you, seize your property or fine you hundreds of thousands of dollars. They just hand out questionnaires.

No matter. The left has been waiting for right-wing violence for centuries and, finally, here it was!

New York magazine ran an article about the dead Census worker, asking, “Has Nancy Pelosi’s Fear of Political Violence Been Realized?”
The Atlantic’s Andrew Sullivan blamed “Southern populist terrorism” for Sparkman’s death, “whipped up by the GOP and its Fox and talk radio cohorts.”

But MSNBC’s Rachel Maddow owned the Bill-Sparkman-was-murdered-by-right-wingers story. Night after night, she breathlessly reported this “breaking national news.” Although Rachel’s main move is giggling and eye-rolling, she was all deadly earnestness when it came to the “troubling story” and the “worry that he was killed in fact because he was a federal employee.”

In case you missed the point, Maddow reminded viewers there’s “a strong suspicion of government generally among people who live in that area.”

A month later, investigators announced that Sparkman had committed suicide in an insurance scam. Rachel left it to her guest host, Howard Dean, to break the bad news to her conspiracy-minded viewers, sparing her the humiliation.

And then we never heard the story of the Census worker again.

A media capable of turning tea partiers, Palin supporters and a random insurance scam into weeks of terror at right-wing violence are not going to let a few nuts waving Nazi flags at a “Unite the Right” rally pass without leaping at the opportunity to outlaw conservatism.

Based on the media’s 100-year history of fantasizing a burgeoning Nazi Party in America, the rest of us would like to wait for the facts on Charlottesville.

Although Coulter does not say it in her column, it is obvious that all the antagonistic journalists to which she is referring are Jews. Coulter herself is most certainly aware of this, and sometimes it is too much even for her conservative manners, as was revealed in 2015 at the height of the US presidential election debates.

As was copiously reported in the Jewish media at the time (see for example the Times of Israel of September 17, 2015), Coulter “set off a firestorm of controversy” when she used the F-word in connection with Jews.

She was expressing frustration with the abundance of pledges to support Israel during the Republican presidential debate.

“How many f—ing Jews do these people think there are in the United States?” Coulter said on Twitter during the final minutes of the three-hour debate, when four of 11 candidates mentioned their support for Israel in their closing remarks.

Her tweet came as part of a barrage of comments accusing candidates of focusing too much on Israel and too little on answering the questions they were asked. 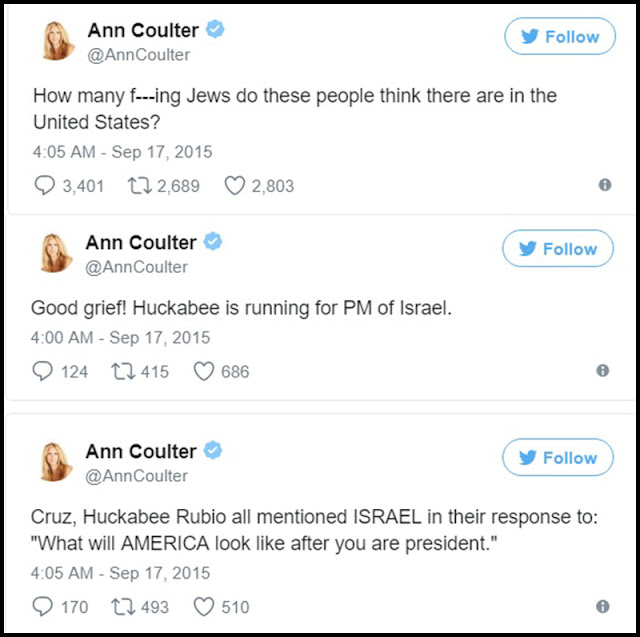