Under different circumstances, Alabama civil rights lawyer Morris S. Dees and American Enterprise Institute scholar Charles Murray might have been colleagues, even pals. Instead, Murray found himself in a near-riot at Middlebury College after accepting a speaking invitation from Republican students at the Vermont school. Students and faculty galvanized by Dees’ political organization barred Murray from speaking. They shouted him down, chanted their own manifesto and pulled fire alarms to prevent him from being heard. 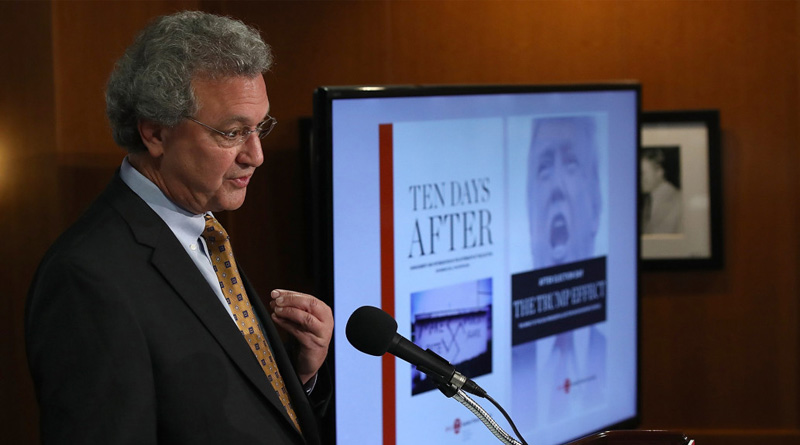 When Murray and Middlebury professor Allison Stanger tried to leave the building, they were followed by protesters who accosted them physically. The professor was grabbed by the hair and her neck twisted — she was fitted with a neck brace at a hospital — and their car rocked in a way that alarmed local authorities.

It was another victory for opponents of free speech, and if that seems like an incongruous scalp for a civil rights lawyer to wear, well, our politics are pretty odd these days.

Charles Murray is a political scientist with a doctorate degree from MIT. The American Enterprise Institute is a Washington-based think tank devoted to “defending human dignity, expanding human potential, and building a freer and safer world.” Its scholars believe these goals can be attained by promoting democracy and strengthening the free enterprise system in the United States and around the globe.

Morris Dees is a born salesman who was a committed capitalist before he entered elementary school. “When I was 5, I bought a pig for a dollar. I fattened it up and sold it for $12,” he once told People magazine. “I always had a feel for making money.”

When his mother sent him a fruitcake his freshman year in Tuscaloosa, Morris and classmate Millard Fuller wrote other students’ parents offering to deliver freshly baked birthday cakes. Soon they were selling 350 cakes per month. By the time they left law school, they were making $50,000 a year — $400,000 in today’s dollars.

After graduation, Dees and Fuller hung out a shingle and practiced law. But the real money came from their mail order business, peddling everything from cookbooks to tractor cushions. In 1969, Dees sold the direct-mail firm to the Times Mirror Co. for $6 million.

Dees also started a nonprofit, which he named the Southern Poverty Law Center. But he gave up neither the high life nor the direct-mail business. He lives in luxury with his fifth wife and still runs the SPLC, which has used the mail-order model to amass a fortune. Its product line is an unusual one: For the past 47 years, Morris Dees has been selling fear and hate.

The business model is simple, albeit cynical, and best illustrated by its most famous case. In 1987, a Dees-led legal team won a $7 million judgment against the Ku Klux Klan in a wrongful death suit on behalf of Beulah Mae Donald, the mother of a 19-year-old kid murdered by members of the racist group. But the defendants’ total assets amounted to a building worth $52,000. That’s how much Mrs. Donald, who died the following year, received. But Dees reaped $9 million for the SPLC from fundraising solicitations about the case, including one showing a grisly photo of Michael Donald’s corpse.

Today, the center boasts a treasury of more than $300 million, the richest civil rights group in the country.

But with the Ku Klux Klan literally out of business, how was the SPLC able to frighten people into still donating? That’s where the AEI’s Charles Murray re-enters our story, along with many other mainstream conservative groups. Scaring the bejesus out of people requires new bogeymen, and lots of them.

In recent years, you can find yourself on the SPLC’s “hate map” if you haven’t gotten fully aboard on gay marriage — or the Democratic Party’s immigration views. In other words, the Dees’ group classifies individuals and organizations as purveyors of “hate” for holding the same view on marriage espoused by Barack Obama and Hillary Clinton until mid-2012.

Such labeling has consequences, which became clear in August 2012 when a gay rights activist named Floyd Lee Corkins entered the lobby of the Family Research Council armed with a 9mm handgun and 15 Chick-fil-A sandwiches. The gun was for killing as many Christians as he could, although he only managed to wound a guard. The sandwiches? He was going to rub them in the faces of his murder victims. Corkins had heard a Chick-fil-A executive express opposition to gay marriage. Why the Family Research Council? He told police that the Southern Poverty Law Center had labeled it “a hate group.”

This episode prompted the FBI to drop the SPLC as a resource for hate crime cases. It prompted no such soul searching in academia. Before Charles Murray’s abortive visit to Vermont, several hundred Middlebury alums signed a letter opposing his visit. They and the numerous professors and students who protested all cited the SPLC as their sole source for various slanders against Murray: He’s a racist; he favors eugenics; he’s a “white supremacist.”

Murray’s original sin is “The Bell Curve,” a book Murray co-authored more than two decades ago postulating a correlation between poverty and IQ. But it never advocated “eugenics.” Nor is he anti-gay: he’s argued in favor of gay marriage to Republican groups. The “white supremacist” stuff is especially offensive: Murray, who is married to an Asian woman, has mixed-race children.

No matter. The professors who admitted to Professor Stanger that they’d never read a word Murray had written led their students in the chants that drowned out whatever he planned to say at Middlebury.

While the anti-intellectual nature of this juvenile stunt is appalling, what’s worse is that college professors and students at an elite, expensive American college would outsource their thinking to an outfit like the SPLC. One of the professors’ talking points was that his “Bell Curve” research hadn’t been “peer reviewed.” That’s comical when one considers the shoddy nature of the SPLC’s dossiers. As liberal writer Ken Silverstein has noted, “the Law Center is essentially a fraud.”

The most scathing assessments of Dees and his group have always come from the left. Stephen B. Bright, a Yale law professor and president of the Atlanta-based Southern Center for Human Rights, calls Dees a “shyster” and a “con man.” Bright’s primary complaint is that Dees does precious little litigation on behalf of poor people with the amount of money it pulls in. SPLC’s alarmist fundraising scams, shoddy collection of information and long-standing practice of character assassination has been on the record for years — along with its “F” rating from the respected nonprofit watchdog group Charity Watch.

As long as it is reliably hyper-partisan — and the SPLC criticizes Republicans, not Democrats — the tenured twits in America’s faculty lounges can live with all that, I guess. That’s a disturbing enough thought. But what’s the mainstream media’s excuse? How can we continue to cite it as a source and then even pretend that we are nonpartisan?

The American Enterprise Institute today is led by Arthur Brooks, whose passion is attacking poverty. He has interesting ideas about how it can be done, and a willing cohort of idealistic millennials on college campuses who might want to sign on. But with Dees’ disciples shouting and pulling fire alarms and roughing up visiting speakers — and with college professors who brag that they don’t expose themselves to another side of the argument — how will they even hear about it?