The New American Leadership: Biden Tells the World What He Wants It to Know

Jones vs. KMac: Spirit or Material? Toward a Synthesis

Woman Raped by Black Man on Train While Passengers Did Nothing

2030 Vision: Part III—Transhumanism and the Transhumanists of the Great Reset

Who is Really Running the White House?

Black sculptor Kehinde Wiley has produced a bronze monument entitled “Rumors of War.” The work is based upon the famous memorial to Gen. James Ewell Brown (JEB) Stuart in Richmond, Virginia. In fact, it isn’t just based on it, it is a direct copy—at least as far as the horse is concerned. 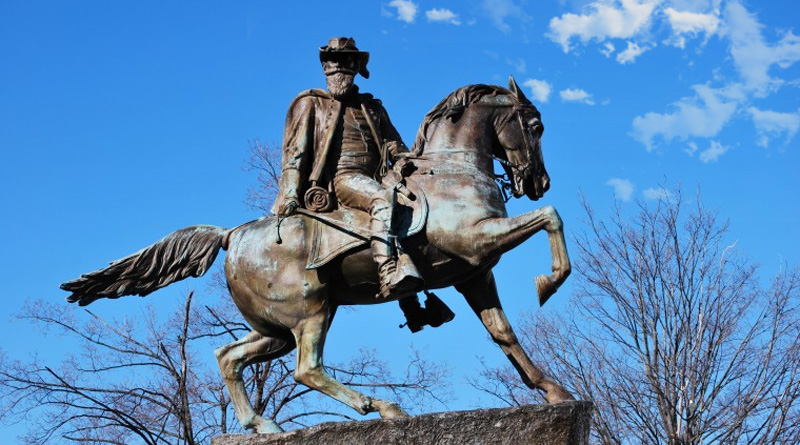 This gigantic rip-off is located in New York City in Times Square, twenty blocks south of the American Museum of Natural History, where the statue of another white American hero is mounted, Teddy Roosevelt. Apparently Wiley views Stuart as fighting to maintain slavery and Roosevelt as a founder of America’s imperialistic criminality, thus killing two white heroes with one monstrous waste of bronze.

Interestingly enough, the sculptor does not make his own subject heroic in any way, but rather, clads him in the wretched trappings of the inner city ghetto, including high-topped sneakers, ripped jeans, a “hoody” and “dreadlocks.” Indeed, the only subject that has any artistic value in the work is the horse, and that was copied exactly from the Stuart monument.

Even the rider’s posture is odd. His head is thrown back and he appears to be anxiously looking around as though he is in fear of witnesses, thus faithfully capturing an expression often associated with that most popular inner-city pastime, LOOTING! One wag has already entitled the work, “The Horsethief!”

Taken objectively, it would seem that the sculptor put whatever talent he possesses into the horse, perhaps because the horse has a natural nobility that even Wiley was unable to tarnish. Meanwhile, attempting to ennoble a black “gang-banger” is beyond even the artistry of a Michelangelo!

I suppose we can expect all the monuments to the heroes of Western Civilization to be replaced by these shoddy fakes, since non-white subjects worthy of displacing them are as rare as unicorns. But that does not make this historical vandalism any more tolerable…or accurate!

There is still time to donate before year’s end! Your contribution will help!