Paul Nehlen Is The Alt-Right Politician That Was Promised

Give him your energy now. I’ve finally found a candidate that speaks my language, which is why I officially endorse him for President in 2024.

I’m talking about Paul Nehlen. And I know, I know, he has to run for Congress first. But I’ve got my eyes on the big prize, and I’m sure that he does too.

Love him or hate him, you have to admit that the man has some sick bantz.

A man who shares my love for Vaporwave/Fashwave.

Who enjoys using Wojack to taunt his enemies.

Who is comfortable with his likeness being immortalized for all eternity as a smug toad.

Helicopter memes are a hit and miss with me, to be quite honest.

Counter-Semitism always gets me to perk up and listen though.

This one gets a standing ovation.

If you haven’t heard yet, take it from me that Paul Nehlen is absolutely based and my favorite soon-to-be congressman of all time.

If his Tweets weren’t enough to convince you that he’s /ourguy/ then his retweets surely will.

Now, are we giving this guy the kiss of death by endorsing him?

Not sure, maybe we are. This could be like a Papa Johns scenario all over again.

That being said, it’s not on us. He already put himself out there by going on Fash the Nation and posting those edgy memes. So, we can’t really put the cat back in the bag on this one. And now at least we get to see if our theory regarding the political climate is correct or not.

You know what I’m talking about because everyone talks about this turning point, when the accusation of being a racist finally loses its edge in the public’s guilt-ridden consciousness.

In other words, have we hit the point where people are finally sick of that accusation being lobbed at any and all opponents of the left? Did the Dems really overuse it with Trump? Will this smear register in voter’s minds and affect their votes? OR. Will the media’s hit job on Paul backfire by getting the #deplorables riled up and supporting him just because they are anti-#fakenews?

All questions that we should put to the test out in the field.

My personal feeling is that the overuse of the term “racist” and the loss of trust in the media mean that the timing is just perfect for Paul’s run. See, with Roy Moore in Alabama, the media had to switch it up. They had to play on the #metoo sexual harassment/pedo angle. The racist stuff was there, but the libs clearly felt that it was not enough this time. They needed to go for the soft underbelly of Moore’s campaign- the woman electorate.

In other words, I think this will be an excellent field run for a great Alt-Right candidate.

In fact, if you just told me about the candidate and left out the politics, I’d immediately tell you that he has a shot. Self-made wealthy man. Check. Hip Gen X tattoos that point to a Libertine past enjoying punk rock that’ll make him appeal to the rest of Gen X. Check. Photogenic? Check, check, check.

I also honestly believe that the memes will go over most people’s heads anyway. It’s /pol/ humor, which is pretty out there and completely alien to the minds of anybody 40 and up. I wouldn’t be surprised to see the older voters just not understand what “goyim” and “groypers” and helicopter memes are all about.

Furthermore, I’m an informed voter. I listen to NPR. I study the issues.

Check out this policy proposal he put out there. 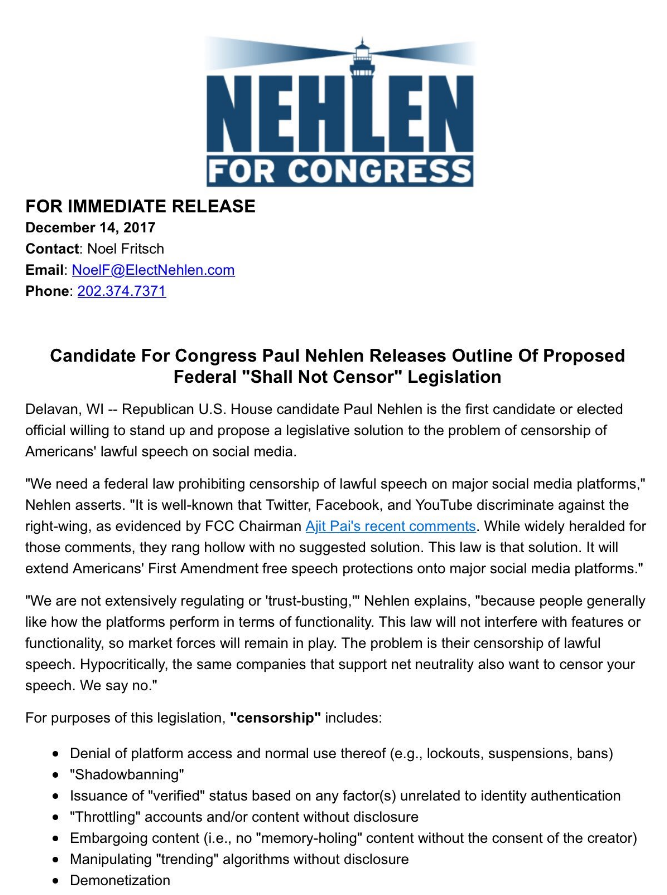 I never thought I’d live to see the day. The right officially championing free speech, non-censorship, and freedom on the web instead of Patriot Act-inspired bullshit. Feels good man. Actually, if anything, Paul’s proposal does not go far enough. The concept of “intellectual property” or whatever legal thingy Hollywood uses to ban pirating of movies needs to be done away with.

With KAT and Piratebay down, I can’t even find a decent site to download season 5 of Vikings in 720p.

Yes, that’s right, we as right-wingers should champion the pro-pirate cause. Anything that starves Hollywood and Netflix is officially part of the Alt-Right platform as of now. Based Paul will lead the charge when the time is right, I’m sure.

But wait, wait. One more.

People may not know it, but Wisconsin has some of the most hardcore conservatives in the US. How do I know this? It’s only logical. See, they have to be seeing their Swedish neighbors in Minnesota self-destruct with their mass importation of Somali campaign. And Wisconsin is just like Norway. Warily keeping an eye on their insane neighbor and ready to learn from their mistakes. Logical right?

The voters will welcome Paul with open arms, just you wait.

Paul is literally the long-awaited Alt-Right political project physically manifested in a good-looking, shit-posting, high-T Amerikaner. Give him your energy.