“The impeachment farce is basically a Jewish affair, noted the Israeli daily Haaretz. The soul and engine of the impeachment is Adam Schiff, ‘Shifty Schiff’ in Trump’s colorful expression. His name brings to mind the Jewish banking house of Schiff, top Jewish aristocracy of money and media. 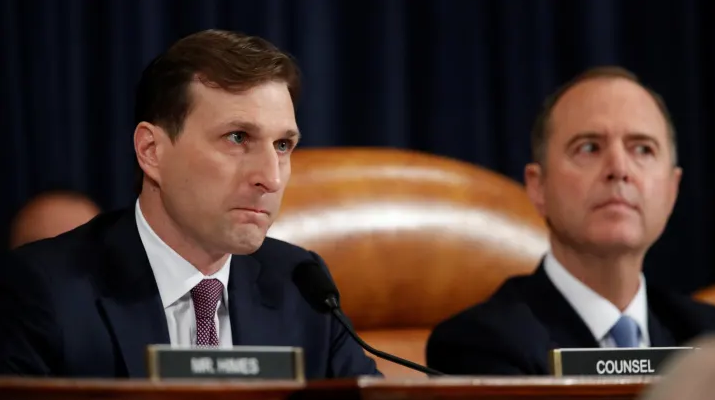 “Haaretz could add that the top witnesses for prosecution are also Jewish, the bizarre Gordon “Zelensky loves your ass” Sondland, or Vindman the Spy. Trump would never dare to notice this remarkable coincidence, concludes Haaretz. Only antisemites would.

Instead of pointing this open conspiracy out and calling the Americans to save the Republic, President Trump appealed to the Jewish sense of gratitude. He bestowed now his third fabulous gift to the Jewish state, namely recognition of the settlements for-Jews-only on the stolen Palestinian land, after he recognised Jerusalem and the Golan Heights.

Or perhaps the fourth, if you’d count his withdrawal out of Iran agreement. He legalised the settlements by the unilateral decision of the superpower, something the Israeli governments never could or dared. If the US were be as omnipotent as it was twenty years ago, that would be the end of Oslo and Geneva agreements, and practically the end of attempts to create a State of Palestine alongside with Israel, something Israeli nationalists wanted all along.

With the US engulfed in the cold civil war, it could lead to self-de-legitimisation of the US, or to collapse of Two States paradigm. It is apparently a huge gift to the Jewish state.

Trump thought that his generosity would melt Jewish hearts, and they would let him govern in peace. But no, the Jews accept every gift as their due; it is absence of a gift that is surprising and troublesome, probably to be explained by anti-Semitism. They said that his recognition will annoy the Democrats, and they will take it away when they regain the White House.

Probably this reaction is exactly what Trump counted on, for he does not care about Palestine or Israel. His target audience is the US Jewry. Trump hopes that the Jews who care about Israel more than they care about the US would switch allegiance and support him, so the Democrats wouldn’t win the next elections and roll back the recognition. Judging by past experience, the Jews will gain by this competition for their favours, while the US will lose, and so will Trump.

It is worth our while to see who are the Jewish persons in the impeachment proceedings. Adam Schiff, whether a remote relation to the banker Jacob Schiff or just a namesake, could be a reincarnation of the old man; for he inherited his love for mass immigration and hatred to Russia. Before Jacob Schiff’s time, the US Jewry was a small community.” 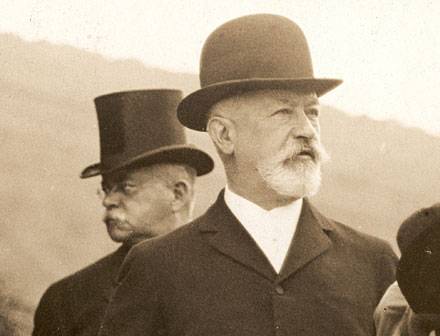 “Wealthy, yes, but very small. Jacob Schiff who arrived to the American shore in the mid-19th century, understood that he needed numbers, masses, demography on his side if he wanted Jews to become an important player. He organised mass immigration of Russian and Polish Jews into the US. “He lobbied Congress and President Grover Cleveland to prevent the passage of legislation which would have prevented the massive wave of Russian Jewish immigrants from whom most current New York Jews descend”, says the Jewish source.

Millions of Jews arrived and eventually changed the US in their own image. Now Adam Schiff wants to import millions of Third Worlders to cement the change started by Jacob.

Jacob Schiff’s hatred of Russia had been quite extraordinary, even by the standards of that time. A prominent banker, he issued a war loan to Japan to build its fleet to fight Russia. Accidentally, the fleet built with Schiff’s money had attacked Pearl Harbour some years later, so every victim of the Pacific War and his descendants may sue Schiffs for their contribution.

Long before Soros and NED, Jacob Schiff played the regime change game in Russia, bankrolling the revolutionaries. (He contributed to February 1917 revolution, the liberal pro-Western coup, but the Russians screwed him by doing another coup in November 2017 and installing the Bolsheviks; his agents had to flee and Russia regained its independence, while Schiff had lost his investment.)

Adam Schiff is rabidly anti-Russian just like Jacob was. He dreams of a regime change in Moscow like Jacob did. He claimed Russian conspiracy had brought Trump to the White House; he refused to accept Mueller’s enquiry results and still insists that the Russians interfered in the US elections. His words of “damning evidence” of collusion with Russia, “more than circumstantial,” a scandal of a size “beyond Watergate” had poisoned Russo-American relations, and made Trump presidency a lame duck from the first moment.

Adam Schiff is so dishonest and unfair that even the WSJ noted his innovation in law. “Is it an impeachable offense for a president to resist impeachment? House Intelligence Chairman Adam Schiff told CNN last week that White House officials’ refusal to testify in his committee’s impeachment probe could lead to “obstruction of Congress” charges against President Trump.”

Perhaps, after all, Adam Schiff is a relative to another swindler, Irwin Schiff, who died in federal prison in 2015 while he was serving a 13 years sentence for tax evasion. (Probably it is anti-Semitic to mention the old canard that some Jews could be swindlers, but we’d dare anyway).

His wife is a Vice President of Goldman Sachs Bank, the “great vampire squid wrapped around the face of humanity”, in the famous words of Matt Taibbi. His family had established a special program called The Birthright-Taglit. The name implies that every Jew has a birthright for the land of Palestine, as opposed to its natives.

The program allows American Jewish youths to make a free (courtesy of US taxpayer) trip to Israel, to meet other Jewish young men and girls and to fight intermarriage by marrying within the tribe. That’s right, you are forbidden to approve of such racist measures, but Jews are allowed to run it as a tax-exempt charity.

Daniel Sachs Goldman’s family is also a founder of New Israel Fund, another tax-exempt, that directs money saved from the US tax authorities (where it could reach goyim) towards Jews-only purposes.

George Soros is another prominent Jewish participant in the impeachment proceedings. The old reptilian is so ugly that our soul (being naturally Wildean) feels he is immoral, too. The facts on the ground confirm this premonition. If the Ukraine had been turned from a jolly rotund East European country into pale grim disaster area, he is partly responsible.

While the impeachment deals with Trump’s alleged interference in the Ukraine, the case of Trump enemies’ interference in the Ukraine is open and shut. They interfered so rudely in the dealings of the ostensibly sovereign state, that they had a joke among themselves: “The Vienna Convention is optional for our Kiev staff”. The Vienna Convention is the international agreement forbidding the diplomats to meddle in the internal affairs of the state they are posted at.

Some of this meddling had been done by and for Joe Biden, who robbed the Ukrainian state of ample funds; George Soros had been another beneficiary of the State Department activity.

He has a few NGOs there, and the US Embassy under the Ambassador Marie Yovanovitch (another accuser of Trump) actively shilled for them. John Solomon discovered that one of the witnesses for the prosecution in the impeachment hearings, then-embassy Charge d’ Affaires George Kent (now he has risen to the lofty position of the Assistant Secretary of State) demanded from the Ukrainian authorities to drop investigation of Soros’ own NGO, the Anti-Corruption Action Centre (AntAC).

Moreover, on March 5, 2019, Ambassador Yovanovitch had delivered a speech asking for “Ukraine’s special anticorruption prosecutor to be removed.” And this woman dares to speak of Trump’s interference!

George Soros had a regular access to the Ukrainian desk of the State Department, to Assistant Secretary of State Victoria (“F*ck EU”) Nuland. It is difficult to separate between the twain, for the AntAC had been jointly funded by the State Department and George Soros. But George Soros is untouchable, for the ADL President Jonathan Greenblatt already determined that “Invoking Soros … is trafficking in some of the worst anti-Semitic tropes.”

A former Federal Attorney for the District of Columbia Joe DiGenova committed this grievous crime, when he said on the Fox News that George Soros had a daily opportunity to tell the State Department through Victoria Nuland what to do in Ukraine. “Soros ran it. He corrupted FBI officials, he corrupted foreign service officers.

George Soros wants to run Ukraine and he’s doing everything he can to use every lever of the United States government to make that happen.” DiGenova didn’t mention Jewishness of Soros or of his friend Nuland; it was not necessary. An attack on George Soros is an
attack on Jews the world over, concluded a knowledgeable observer.

Joe DiGenova indeed is guilty, but of understatement. George Soros wants to run Ukraine, he said. The Ukraine is a small though profitable part of the world Soros and his companions-in-arms want to run. The US is the more important part, and by running it, they can get the Ukraine for a side dish.

The impeachment indeed became an important affair, not as a threat to President Trump, but because it revealed the modus operandi of the liberal Jews. It would be better if instead of Donald Trump their opponent would be a shining knight on a white charger. But we’ve got what we’ve got. These guys should be stopped, and if Trump will do it, bless him.

His tactics of bribing Jews with rich gifts of Palestinian patrimony are immoral, and I doubt they will be effective. Probably if he were to call for justice and equality for Palestine he would not have a chance of snowball in hell. By dividing his enemies between Zionists and Liberals, he improves his chances, or so he thinks.

For people who cherish and treasure Palestine like I do this is a hard choice. Liberal Jews sound nicer; they speak against Jewish settlements in the occupied territories; they condemn Israeli shelling of Gaza and Syria.

But we had a long experience of their ascendancy: they do preciously nothing for Palestine and they allow Israel to commit all possible crimes. A condemnation is not good enough if the flow of weapons and finances is not affected.

The Jews are used to play for both teams, and win twice. By going into absolutely forbidden, no-go area of seeing the impeachment team as a Jewish team, this game may be changed. If and when Capitol Hill will be free from occupation, the time for freedom of Jerusalem will also come.”

Published by: The Unz Review