By Tom Sunic, Ph.D. — The Jewish and Serbian communities in Croatia have decided to boycott the official commemoration of their World War II dead, which is scheduled to take place in Croatia from April 15 to April 22 of this year. Their boycott was expectable. Over the last twenty years there has been an increasing effort among Croat historians and an array of nationalist politicians to downplay Croatia’s involvement in crimes with their National Socialist allies during World War II, while significantly increasing the numbers of casualties incurred by disarmed Croat NS-allied soldiers and civilians who were victims of Yugoslav Communist partisans after WWII.

Predictably, the Simon Wiesenthal Center and its chief moral admonisher for East European governments, Ephraim Zuroff, are now playing an important role in reprimanding the Croat government and public for not emphasizing the primacy of Jewish victimhood — never mentioning massive post-war crimes committed by early Communist governments in Yugoslavia and elsewhere in Eastern Europe. With his frequent criticism of East Europeans, who had allegedly failed to come to the rescue of persecuted Jews in war-torn Europe, Zuroff has managed to pit diverse nationalist narratives in East Europe against each other. The simmering conflict of World War II memories between Croatia and Serbia has again reached a boiling point with insults of “Fascists”, “Communists”, “anti-Semites” flowing around on both sides. From the point of view of international security, the relationship between Serbia and Croatia does not look good. It is at its lowest point since their bloody divorce following the break-up of Yugoslavia in 1991. 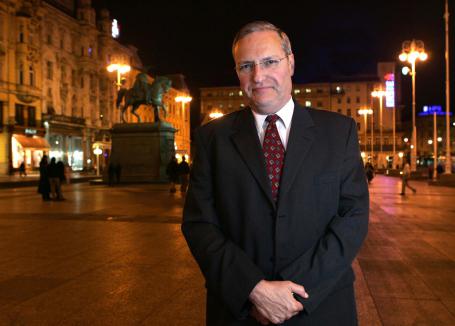 Mathematics in lieu of Historiography

The small Jewish community in Croatia (approximately 1000 members), and the much larger Serbian community (250,000), including a very large number of Croatia’s communist veterans and retired communist apparatchiks, are upset over the ongoing prodding into their own World War II body counts — especially over the critical delving into the numbers of their post-World War II victims at the “Croatian Auschwitz,” i.e., the Jasenovac camp. It appears now that the early local Communists in Yugoslavia ran what had been Jasenovac, the “Nazi” camp after World War II. Croat revisionist scholars claim that more people were killed by the Yugoslav communists after World War II than by the Croat NS-allied regime during World War II. Their victims included Croats and Germans who were captured “enemy combatants,” civilians, including ethnic Germans, anti-communists, clergy, etc.

Their data, which includes the allegedly 200,000 to 500,000 killed Croat civilians and soldiers after WWII, is based on forensic examinations, tons of bare bones and excavations conducted at over 800 hidden sites in Croatia and in neighboring Slovenia over the past ten years. Curiously, neither the Croat nor the Serbian government, nor the SWC want to solve the mystery of these diverse victimhoods. No party is keen to give official green light for ploughing the ground in and around the “Croat Auschwitz” Jasenovac and uncover the truth. Instead, the site of the Jasenovac camp in Croatia continues to function, just like it did in Communist Yugoslavia, as the largest “memorial antifascist center” in this part of Europe.

During the lifetime of communist Yugoslavia, the tally of Serb-Jewish-Communist-Gypsy casualties at Jasenovac in the official Yugoslav narrative (mandated in the public schools) ranged from 300,000 to 1.5 million dead. With the proclamation of independence of the new Croatia in 1991, the Croatian government, headed then by Franjo Tudjman, who was himself a revisionist historian, that number sank abruptly to 80,000. But even that figure is being openly rejected today by several Croat historians whose effort is being backed up by a significant number of influential Croat Catholic clergymen. These Croat revisionist historians, many holding strong nationalist views, claim that the “Croat Auschwitz” — i.e., the Jasenovac camp, was just a tiny “labor camp,” and given its size, no more than 1,000–10,000 Serbs, Jews, Communists, Gypsies, could be housed there at any time over the period stretching from 1941–45, with the implication that far fewer internees were killed there.

The additional rebuke came from the Simon Wiesenthal Center and its emissary Ephraim Zuroff, seconded by the admonitions of the ever present aging ex-Communist Croatian Jew Slavko Goldstein who protested the recent screening of the documentary Jasenovac — the Truth by the Croat director Jakov Sedlar. In this documentary Sedlar focuses mainly on crimes at the camp of Jasenovac allegedly perpetrated by the Yugoslav Communist authorities after the end of World War II. For allowing such an open “historians’ debate” to take place in public, the recently sworn-in center-right coalition government of Croatia has become the prime target of the mainstream media in the EU, the local antifas, and some journals in Israel — all calling for the dismissal of several Croat government officials.

Further fuel to the fire of the ongoing war of memories is being added by recent diplomatic “charges of fascism” by Serbia against the government of Croatia. The Serb authorities continue to use the tally of 500,000–700,000 Serbs, Jews, Communists, Gypsies allegedly killed by the Croat NS-allied regime at the Jasenovac camp between 1941–1945. Thus official Serbia resorts to the same memorial narrative which was once part and parcel of mandatory public education in communist Yugoslavia.

If these memorial disputes were restricted to ivory tower academics, there would be lots of laughter and plenty of material for interesting exchanges of ideas. But these disputes, in an oblique manner, are already having a haunting impact on security arrangements in Europe. Croatia, being a full-fledged NATO member, is also an important linchpin in its Southeastern defense flank. Serbia, by contrast, which is not a NATO member, has traditionally nourished warm historical, religious and cultural ties with Russia. Moreover, the current president of Croatia Kolinda Grabar Kitarovic, prior to her inauguration last year, had been to a large extent groomed by NATO officials during her tenure in Brussels. Also worth recalling are century-long Croat sympathies for the people of Ukraine. Two years ago, Croatian nationalists were among the first to dispatch a dozen volunteers to Ukraine to fight the Russian secessionists — creating for a while a serious diplomatic rift between Russia and Croatia. Serbian nationalists did the same — albeit by sending their volunteers to Russian secessionists in eastern Ukraine.

Also indicative is the official visit to Croatia, on April 10, by Nicholas Dean, a special US State Department envoy in charge of the Holocaust issue. Ironically the day of his Croatia sojourn coincided with the anniversary of April 10, 1941, the date when the first Croatia under German NS sponsorship had come into being. Although April10 is today publicly rebuked by all parties in Croatia, it is still widely celebrated in private by millions of Croats, both at home and abroad among expat Croats from San Francisco to Stuttgart, from Santiago de Chile all the way down to Sydney. It is now being rumored in Croatia that president Kolinda Kitarovic is being pressured by Israel and its proxy US emissaries to fire some Croat politicians for holding “fascist, revisionist and unacceptable” views.

What lessons can one draw from the Serb-Croat-Jewish war of conflicting historical memories? In view of the present racial and population replacement in Europe and the USA, following the Afro-Asian migratory tsunami, inter-European memory wars appear dated. The true art of politics consists in deciphering the real enemy and not getting sidetracked by picking on a surreal enemy with outdated tools. Instead of endless and unsubstantiated guesswork about some dark forces ruling over the planet Earth, White advocates in Europe and the USA should pose a very simple rhetorical question: Who benefits most from eternal inter-European memory wars? Who is the chief profiteer from senseless inter-White conflicts?

Dr. Tom Sunic is author and Board member of the AFP.