Is It Time to Begin Talking About Reverse Reparations?

The subject of reparations is quite stimulating and intriguing. Who is deserving of reparations, and under precisely what conditions or circumstances should they be paid or extracted? By primary definition, reparations pertain to claims or demands by a victorious nation over their vanquished opponent. An example of such an occurrence can be observed the post-World War I debts imposed on Germany by Britain, France and other members of the allied coalition.

A secondary definition by Oxford Dictionaries deems reparations to encompass the more generic process of “making amends for a wrong one has done by providing payment of other assistance to those who have been wronged.”

Of course, it is under this broad context that increasingly frequent and vocal demands are being issued forth relative to the past institution of slavery in early America, and the purported injury and injustice inflicted upon black Africans who were transported to the New World in a state of physical bondage.

The Peculiar Institution of Slavery

Slavery, in a literal and formal manifestation, involves the ownership of one individual by another. The slave, as such, exists as the chattel, or property, of his or her owner. Since the dawn of recorded history slavery has existed and in many cases flourished.

In his book entitled, They Were White and They Were Slaves, author Michael Hoffman fleshes out a largely unknown story of how large numbers of Caucasians endured the anguish and hardships that often accompany the reality of being a slave. His book is described as follows in online forums where it is offered for sale. The description goes as follows: “They Were White and They Were Slaves is a thoroughly researched challenge to the conventional historiography of colonial and industrial labor, a stunning journey into a hidden epoch, the slave trade of whites, hundreds of thousands of whom were kidnapped, chained, whipped, and worked to death in the American colonies and during the Industrial Revolution. This is a chronicle that has never been fully told, part of a vital heritage that has until now comprised the dustiest shelf in the darkest corner of suppressed history.”

Interestingly, those who want to talk about slavery in our present era have no interest, whatsoever, in exploring the long-suppressed truth about white slavery. Instead, they only want to focus on the historical chapter that saw vast quantities of black Africans pressed into the ranks of the enslaved.

Frequent estimates of the total number of black Africans who were sold into slavery and transported to the New World, actually exceed ten million. Of towering significance is the fact that these slaves were sold into bondage by members of their own race who, through forceful conquest, had come to claim ownership of the.

Legions of African slaves were transported across the ocean to the shores of the New World where they became an integral component of the agricultural labor force. In most instances, Africans fell into slavery as a result of having been subdued and subjugated by aggressive neighboring tribes. Without question, slavery was big business and spawned many notable fortunes in the New World. Those who actually owned slaves in early America were but a tiny percentage of the population at large. The South, of course, became home to the higher number of slaves given its agricultural-based economy. Nevertheless, there were large numbers of slaves in the northern states as well, even as the War Between the States raged in the 1860’s.

Slavery was well on its way toward cessation in America long before the military conflict that became known as the Civil War. Influential founding fathers are on record as having been opposed to the continuation of a system of slavery that had been passed on to them by their own forbears.

The looming end to slavery was merely a question of when…not if. The monumental question among those given to profound contemplation centered on the challenge of what should be the fate of the future freed, black slave population. Overwhelming consensus leaned decidedly toward the proposal of repatriation. The nation of Liberia was established as the intended African state that would become home to a repatriated population that would number in the millions.

White Americans from all geographical regions were virtually unanimous in their belief that the former black slave population could in no wise be assimilated into the fabric of national life on the basis of equality. It was a bland and well-accepted notion that, as a race of people, blacks were far behind whites in terms of both potential as well as actual accomplishments. To allow freed blacks to remain in America would certainly guarantee the advent of a host of problems and complications that would potentially threaten the nation’s ability to survive.

In the excellent documentary, The War Between the States and the Undefeated Southern Truth, black academic Edward C. Smith explains how many white leadership figures were genuinely surprised by the notable lack of enthusiasm on the part of freed blacks over the prospect of returning to Africa. The professor attributes this phenomenon primarily to the fact that these blacks now considered America to be their home, and they simply didn’t want to leave.

One can easily imagine, however, how unappealing it would be to face the prospect of returning to the dreaded realities of life on the dark continent of Africa. To their credit, this earlier generation of blacks fully understood the merits and advantages of remaining in the far more favorable conditions and circumstances into which fate had ultimately delivered them. Thus…the repatriation plan ground to a halt.

As a result, America’s future was now ominously threatened by a variety of potential developments of a highly problematic nature. Chief among these imposing threats was the eventual likelihood of forced social integration of the races and the inevitable inter-racial breeding that would follow in its wake. From the standpoint of abject realism, failure to execute the repatriation strategy had effectively set the stage for today’s conditions and circumstances that are highly unfavorable to the cause and continuing well-being of the Caucasian American populace.

In post-Civil War American blacks wanted no part in plans for repatriation to their African homeland. Instinctively, they recognized that remaining in the midst of their white superiors was overwhelmingly in their overall best interest. 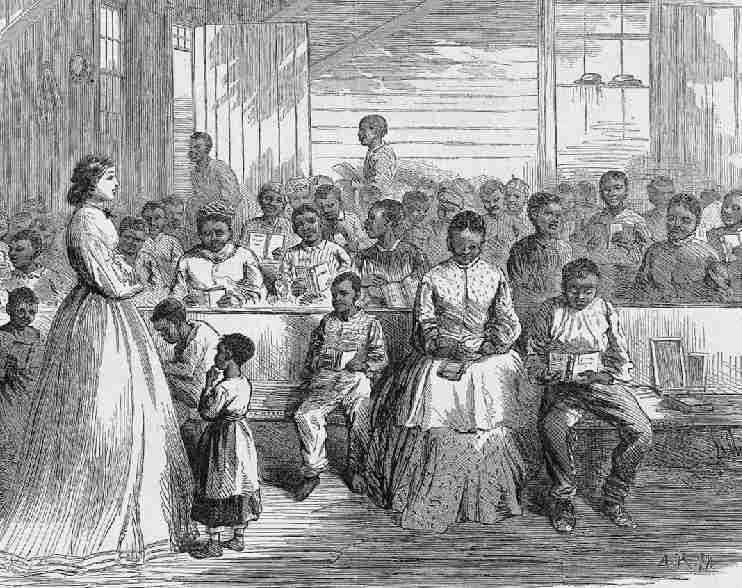 While this historical turn of events has proven to be much to the detriment of white Americans and the nation as a whole, it is utterly undeniable that blacks, in general, have benefitted immeasurably via their having been brought to America and the New World. Their collective prosperity, positive living conditions, and potential for growth and opportunity have placed them veritable light years beyond their racial kinsmen who remain a part of the family tree that failed to escape the ravages and limitations of the indigenous African homeland. And yet, as a larger specific racial group, blacks in America remain in an overall state that is both inferior and disadvantaged.

The Demand for Reparations

Sadly, blacks in America have seemingly been ripe for political exploitation since the time of their emancipation. As continuous pawns of the chessboard of national politics, they have routinely been manipulated in a way that has greatly undermined their own interest and well-being.

Cynical and disingenuous political operatives have ceaselessly instilled within the American black psyche the notion of perpetual victimhood. Along with this toxic mindset has come the intermittent demand for justice in the form of reparations. Of late, these demands have become so extreme on the part of more militant black factions, as to include the surrender of all white-held wealth and property to those who happen to be the present-day descendants of America’s former slave population. Unfortunately, as the overall percentage of white population dramatically decreases, the preposterous demands for reparations will only increase and expand.

Twenty years ago black demands for reparations were largely recognized as the insane and absurd proposition that they are. Whites typically would scoff and shake their heads in dismay and incredulity at the mere suggestion of such inane proposals. Little did they realize that before too terribly long the prospect for reparations as a means of offsetting the incalculable injustices of slavery, would be gaining notable traction not only among the black population…but in the midst of a growing number of young, brainwashed, white-guilt laden, Caucasian citizens!

As we can readily recognize, lies are very powerful and influential. Despite this fact…truth is of far greater potency than the deception and evil that have grown to be so strong in our nation. In fact, lies can only exist and flourish in the vacuum that is created when truth is silenced or rejected. For this reason, it is most crucial that we focus on the unfettered truth relative to the subject of reparations.

A 20th century example of the continuously growing problem of devastation and destruction in American city slum areas.

You see, in reality, true justice would require that blacks cease and desist in their demands for reparations…and instead be informed of the very real debt owed by them for the unwarranted opportunity to have remained in America in the post-War Between the States time period!

Yes…according to God’s law of kind after kind, and original design for territorial habitation, blacks should have been forcefully repatriated to their God-ordained, African homeland. No amount of money could serve to legitimize the abrogation of the repatriation mandate, but reverse reparations would at least constitute a beginning toward an understanding of the great favor and privilege that has been extended toward blacks in America by virtue of their having been allowed to remain on this hallowed and favored land mass. And, while we would certainly be foolish to hold our breath waiting for this truthful analysis to be embraced on a significant scale…we can at least take solace and comfort in knowing that it is the truth!