As reported by CBSNEWS:

Customs and Border Patrol have announced that construction on eight different prototypes for President Trump’s long-promised border wall along the U.S.-Mexico border has begun in San Diego, California.

In a statement released on Tuesday, CBP says that four of the wall prototypes will be constructed from concrete, while the remaining four will be made of “alternate or other materials.”

“We are committed to securing our border and that includes constructing border walls. Our multi-pronged strategy to ensure the safety and security of the American people includes barriers, infrastructure, technology and people,” said Ronald Vitiello, acting deputy commissioner, U.S. Customs and Border Protection. “Moving forward with the prototypes enables us to continue to incorporate all the tools necessary to secure our border.” 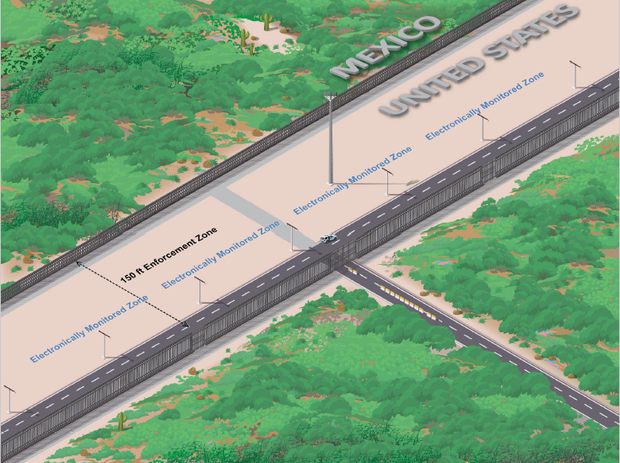 CBP unveiled the companies selected to construct the prototypes late last month. All hail from construction companies from across the United States, including Maryland, Alabama, Arizona, Texas and Mississippi.

“All eight prototypes will be between 18-30 feet high and designed to deter illegal crossings in the area in which they are constructed and will inform future design standards which will likely continue to evolve to meet the U.S. Border Patrol’s requirements,” they added.

CBP is expecting construction of the prototypes to be completed within 30 days. Once built, prototypes will then be thoroughly tested by CBP for their effectiveness in “deterring illegal crossings in the area in which they are constructed.” This includes gauging penetrability using “small tools and hand tools,” but not explosives.

According to CBP, each prototype will cost an average of $450,000. The final cost, an estimated $4 million, will be covered by already-sanctioned federal appropriations for the 2017 fiscal year.

The issue of who’s footing the bill for the wall has proved to be an area of contention between the U.S. and Mexico, as Mr. Trump has repeatedly called on Mexican President Enrique Pena Nieto to commit to sharing the costs of his “big, beautiful” wall.

In its most recent effort to dispel further confusion, Mexico’s Ministry of Foreign Affairs wrote in a statement late last month, “As the Mexican government has always stated, our country will not pay, under any circumstances, for a wall or physical barrier built on U.S. territory along the Mexican border.”

The Trump administration has also asked Congress for $1.6 billion to build Mr. Trump’s wall. The House approved a package including the money, but the Senate has not.