We Dare To Win and Write History Again And Again

NORDIC RESISTANCE MOVEMENT. Last week’s public action in Iceland was one of many milestones in the Nordic struggle for freedom. Here the leader of the Nordic Resistance Movement discusses this and other groundbreaking activities. 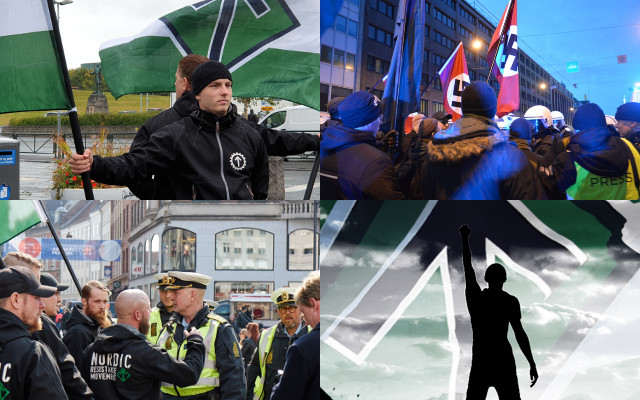 The Nordic Resistance Movement is a revolutionary movement in both rhetoric and action. We continuously seek to break the status quo. We will never be content with being where we are. Instead we will always challenge ourselves, just as we will challenge the system and our enemies. When we overcome the barriers standing in our way, we race forwards towards the next. If there are no barriers in sight, we make sure to press on until we encounter one.

To win, one must be bold and take risks. I want this to be something that distinguishes our organisation – that we are continuously in forward motion, whatever stands in our way. Even if there have been occasions when this tactic has cost more than it gained, we have still won overall. We must be daring and also be prepared to lose to keep moving forwards at the desired pace.

The clock is close to striking midnight, and the bitter truth is that we have time against us. The system’s overwhelming resource advantage and the continually decimated Nordic population contrasted with the massive invasion of racial foreigners means that we quite simply can’t afford to stop, take it easy and just exist and be satisfied with being where we are. He who dares wins. And even if we don’t win, it doesn’t change the fact that we will lose for certain if we DO NOT dare.

In recent years our activities have been characterised by many of these risks. Even if they haven’t always worked out, together they have led to greater successes than failures. Two simultaneous 1 May demonstrations, swastika flags leading the Towards Freedom demonstration in Helsinki after the organisation was banned, widespread campaigning in the run-up to the election, new website projects and ambitious media ventures as well as innovative actions, such as the motorboat activity outside Sweden’s parliament, are just some of the many groundbreaking things we achieved last year.

This year we held a public activity in Copenhagen for the first time with a spontaneous demonstration, conducted confrontational activism in the “Left’s” old stronghold of Lund, stood with flags and a banner at the finish line of the Vasaloppet, launched a regularly updated English-language website, and just last week we held our first public activity in Iceland with a leafleting session in central Reykjavik. 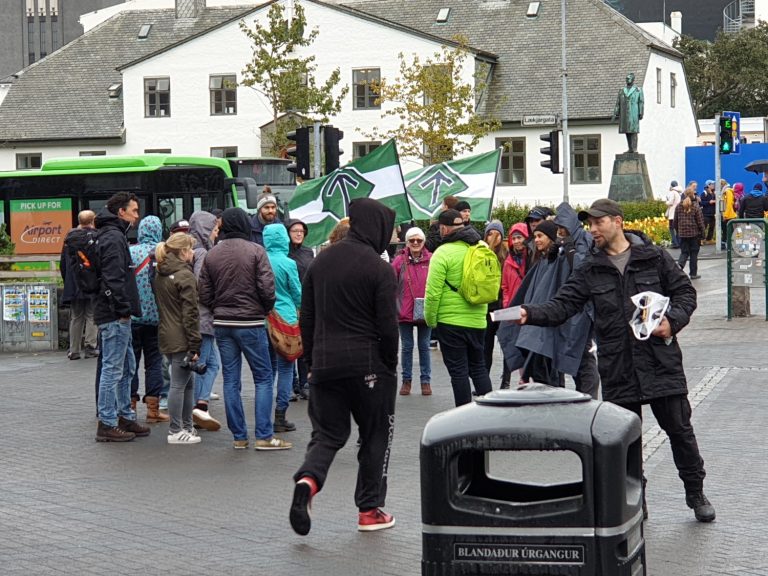 All of these activities involved taking risks, physical and/or in respect to resources and our reputation – where we thought outside the box and then acted with resolution. Some, such as the action in Iceland, are clear milestones in the Nordic nationalist struggle and will be written into the history books after our final victory. Through risk-taking and self-sacrifice, our members write history in their struggle every day.

Alternatively, if the struggle eventually fails because not enough of you did what was required, then at least we will etch our name into our enemies’ minds and ensure they have nightmares for generations about Tyr rune flags waving in the winds – still a noble aim for our struggle that will have been worth all the hardships and every second spent. 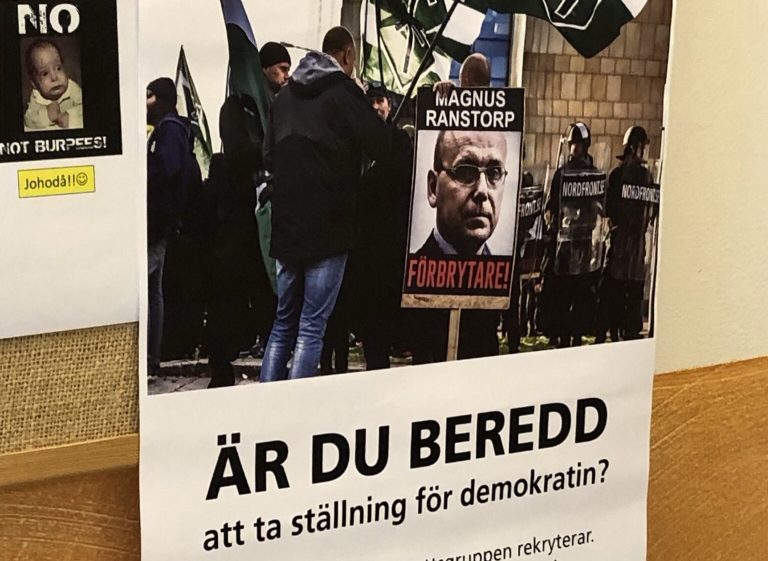 “Are you prepared to take a stand for democracy?” A recent police recruitment advertisement for their “hate crime” department, with a photo of a Nordic Resistance Movement demonstration.”

What is the meaning of your life? What are you doing to make a difference? What will you be remembered for? Not for your perfectly clipped lawn every autumn. Not for all the beers downed at the pub. Not for all your efforts at the plant or the sports club.

Instead be part of something bigger. Make a difference. Do as we do, and dare to challenge yourself and take risks to win. Last week we stood in central Reykjavik – who knows where you will find us Resistance men tomorrow. Whatever the case, we will certainly not remain where we are today but will continue to be bold and take risks and keep writing history. We will continue to break the status quo in the struggle for a Nordic revolution!