When the Only Choice is Kosher-Certified, and You Object: A Layman’s Glance at Legal Recourse

Why People Don’t Trust ‘the Science’

The Cult of Stupid: Libertarianism, Leftism, and the Murder of Free Speech

Basic Facts About Race in 13 Minutes

The Disease of Libertarianism

Bloomberg View news reports notes that “Anyone wondering why so many white, middle-aged men are drawn to the anti-establishment campaign of the Donald Trump variety should take a look at the latest jobs report: They’re still having a hard time getting back to work.”

Broadly, the employment report for March suggests that the U.S. economy is growing at a steady pace. Nonfarm employers added an estimated 215,000 jobs, bringing the three-month average to 209,000, more than enough to compensate for natural growth in the labor force. The unemployment rate rose a bit to 5 percent, but for a desirable reason: More people were in the job market, a prerequisite for being counted as unemployed. An increase in hourly average earnings more than reversed the previous month’s decline, fueling hopes that demand for labor will finally translate into better pay.

By some measures, though, people in their prime working years have a long way to go to recoup the losses of the 2007-09 recession — and white men are further behind than most. On average over the three months through March, a nonseasonally adjusted 86 percent of white men between the ages of 25 and 54 were employed, 2.3 percentage points (or about 1.1 million jobs) short of the average level in the 10 years before the recession. That’s a larger shortfall than any other group — including black men, whose employment-to-population ratio stood 2.1 percentage points, or 156,000 jobs, short of its pre-recession level (though their baseline was much higher). Here’s a breakdown: 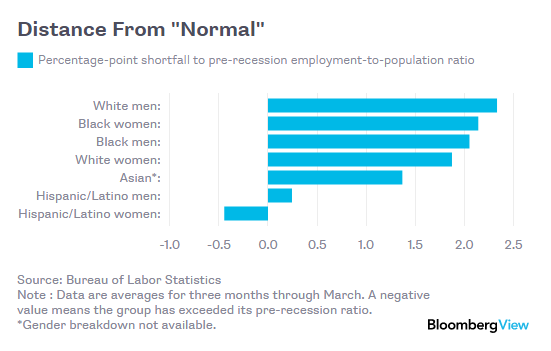 To be sure, the extra 1.1 million out-of-work white guys aren’t necessarily the same people showing up at Trump rallies. That said, middle-aged white males’ progress toward economic recovery has been protracted enough to generate a good deal of frustration. Here’s how far the employment-to-population ratio has been from its pre-recession average since early 2008, in millions of jobs: 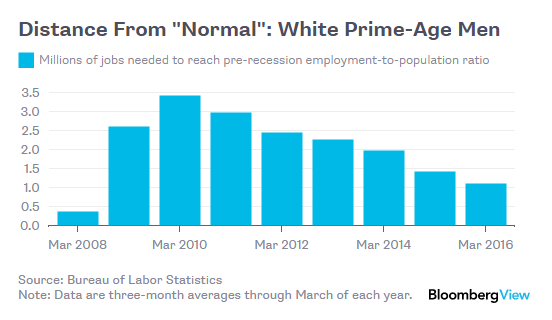 The malaise goes far beyond the political. Most of the prime-age jobless don’t show up in the unemployment numbers because they aren’t actively looking for work — and in many cases are already on disability. If they don’t get back into the labor force, their absence could permanently impair the economy’s capacity to grow.

Economists are split on what policy makers can do. Some think that the Federal Reserve, the government or both should use stimulus to boost economic growth, so the added demand for workers will draw people back into the labor force. Others believe that the motivation-sapping effects of long-term unemployment, among other things, will keep the labor participation rate down — meaning that extra stimulus might lead only to undesirable inflation.

Whatever happens, middle-aged white men are a demographic group to be reckoned with, numbering about 48 million (not including those in the military or in prison). The more they feel left behind, the stranger U.S. politics may become.